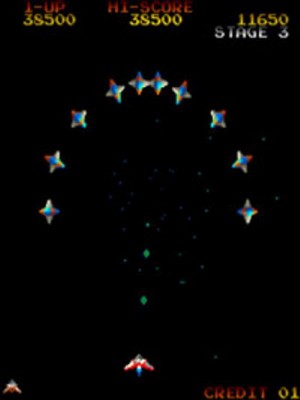 The gameplay is very similar to that of Galaga but with an added twist: the game is presented in a forced 3D perspective, with the player’s ship facing ‘into’ the screen and able to move around the perimeter of an implicit circle – essentially, Gyruss was Galagamapped onto a Tempest-like cylinder. This gameplay style is called a tube shooter, and Gyruss is one of the very few examples that exist. The familiar scrolling starfield of earlier space shooter games was arranged to fit the 3D perspective, with the stars coming into view at the centre of the screen and flying outward, giving the impression of the player’s ship moving very fast through space.

The majority of enemies are other spaceships, all of which must be destroyed before a level is completed. They appear either from the centre of the screen or from one of the edges, and move in swirling patterns. They can shoot the player’s ship or destroy it by contact. They hover near the centre of the screen after completing their deployment pattern, and occasionally fly outwards and shoot at the player. If they are not destroyed by the player, the enemy ships gradually fly away one by one.

There are also several other types of enemies: satellites, asteroids, and laser beam generators. These appear intermittently and soon disappear of their own accord if not destroyed by the player.

Satellites materialize in a group of three just in front of the player after the ordinary enemy ships have finished deployment. They gyrate in small circles and shoot at the player. If the player has the basic weapon when the satellites appear the middle one will be a sun-like object – if destroyed, the player’s ship gets a better weapon. There is only one upgrade possible and if the better weapon has already been gained then all satellites are identical. This is not always easy, as the satellites’ shots do not need to travel far to hit the player’s ship, and the player only has a few seconds to destroy them before they fly away.

Asteroids fly straight outwards from the centre of the screen at regular intervals. They always fly just to the left or right of the player’s ship, so unless the ship moves it will never be hit by an asteroid. They cannot be destroyed but a small point bonus is given for shooting at them.

Laser beam generators occasionally fly straight outwards from the centre of the screen. They consist of two generator segments with a laser beam between them; destroying either generator deactivates the beam. The player’s ship is destroyed by contact with either the generators or the beam.

The player begins the game “2 WARPS TO NEPTUNE”. After completing each level, the player is one warp closer to a planet. Each time a planet is reached, the player’s ship is seen flying towards it and then a short bonus round is played, where the player can shoot enemy ships for bonus points without worrying about being destroyed by them. After reaching Neptune, the player is then three warps from Uranus, and progresses through Saturn, Jupiter, Mars, and finally Earth, taking three warps to reach each planet. Stage one and every 10th stage thereafter the enemies do not fire on the player when entering the screen.

After completing Earth’s bonus stage, the player must travel through the very fast “3 WARPS TO NEPTUNE” level before returning to the start of the game.