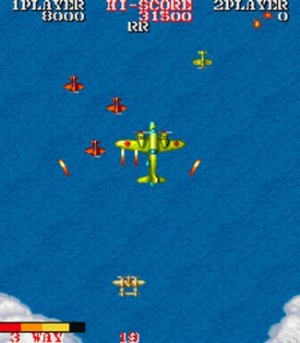 1943 is set in the Pacific theater of World War II, off the coast of the Midway Atoll. The goal is to attack the Japanese Air Fleet that bombed the players’ American Aircraft Carrier, pursue all Japanese Air and Sea forces, fly through the 16 levels of play, make their way to the Japanese battleship Yamato and destroy it. There are 11 Levels consist of an Air-to-Sea battle (with a huge battleship or an aircraft carrier as an End-Level Boss), while 5 levels consist of an all-aerial battle against a squadron of Japanese Bombers and a Mother Bomber that needs to be destroyed.

As in 1942, players pilot a P-38 Lightning. Two buttons are used: one for regular attacks (with several weapons) and one for special actions that executes either a loop like in1942 or one of three special attacks that damage the plane. Unlike 1942, the player only has one life, with one refillable energy meter. In 2-player mode, when both players overlap their planes on screen, the energy bar can be transferred from player with higher energy to the lower one. Destroying a complete formation of red enemy planes will result in a power-up, such as a health boost or a temporary special weapon which replaces the default twin gun. There are cheat codes for each stage, upon successful entry of cheat codes ranging from holding down a fire button or pointing the joystick in certain direction, player(s) are rewarded with fully upgraded weapons.

Pressing both buttons simultaneously causes the player’s ship to loop out of the 2-D action plane temporarily. This is very useful for getting behind enemy planes. Pressing Special calls up a special attack lightning in the air, a wave over water, but also uses up the player’s energy. The game is over when the player runs out of energy, but energy can be replenished via power-ups or for completing a level. Likewise, in two-player mode, players can share life energy by placing both planes over each other for two seconds