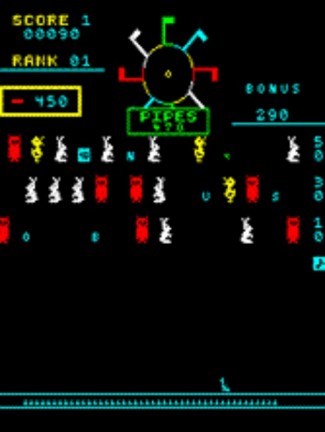 The goal of the game is to shoot at targets, while carefully avoiding running out of bullets. Three rows of targets scroll across the screen in alternating directions; these include rabbits, ducks, owls, and bonus items. If a duck target crosses the bottom row without being shot, it will come to life and begin flying down toward the player. Any ducks that reach the bottom of the screen in this manner will eat some of the player’s bullets. Objects also periodically appear among the targets that will give the player extra bullets or points when hit. A spinning wheel with eight pipes sits above the rows of moving targets; these pipes and all targets must be shot in order to complete the round.
At the end of each round, the player receives bonus points for all bullets remaining in his supply. He then plays a bonus round, where a large white bear with a target walks across the screen. Each time the bear is shot, it rears up for a second, then begins walking more quickly in the other direction. The object is to shoot the bear as many times as possible until it escapes off the screen. Following the bonus round, the next wave begins. Later bonus rounds add more bears to the screen.
In higher levels, there are more duck targets and fewer extra bullet targets, putting a premium on accurate shooting. The game ends when the player runs out of bullets.