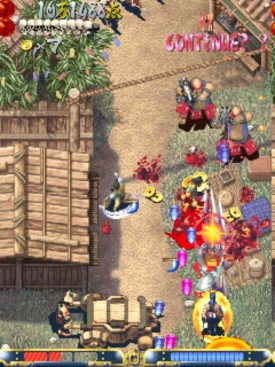 Destroy the evil army with 3 Japanese characters and the spirits that possess them in this beautiful vertical shoot-’em-up.

The story of Guwange is set during the Muromachi period of Japan. Sorcerers in eastern Japan would predict the day’s fishing catch by the appearance of a fox-like voice from the mountains. If the voice sounded ‘koon koon’ then there was to be a great catch. If the voice sounded ‘gwange gwange’ then it was to be a horrible catch. The people soon named the place of the voice ‘Prison-Gate Mountain’, as all who saw the origin of this voice were never seen again. The people soon began to worship this being as the god of Prison-Gate Mountain. It is said that the men later came to call it ‘Lord Guwange’. The game title of ‘Guwange’ appears to reflect the name of this mysterious mountain voice and also the ‘bad’ sound that it made to predict a horrible catch.

This game was supposed to be exported to South Korea. But Korean deliberation Organization rejected this game, because it has strong Japanese things (Korean people are really anti-Japanese).