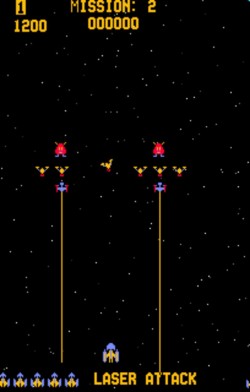 The player controls a spaceship that must blast its way through five missions, each a different challenge. The game features a pistol grip joystick and robotic speech synthesis that heckles the player during gameplay.

The player’s goal is to defeat the Gorfian Empire in five separate missions. The first mission is like Space Invaders. The second mission pits the player against two squads of diving ships, each squad has a special ship that fires long laser beams. The third mission is like Galaxian. The fourth mission has the player fight a number of enemies that spiral toward the player shooting fireballs. The fifth mission has the player fight the Gorfian Flagship. The Flagship’s shields must first be battered down, then the player must hit the Flagship in a tiny exhaust port in order to destroy it. The game then continues by sending the player through the missions again, which are harder than before. Each time the player destroys the Flagship, the player advances in rank. Starting out as a Space Cadet, the player moves on to Space Captain, Space Colonel, Space General, Space Warrior, and finally Space Avenger. The player’s spaceship is equipped with a Quark Laser. This allows the player to cancel a poorly aimed shot and fire another shot. Game allowed player to start with double the amount of normal ships with the deposit of two credits instead of one.

Gameplay is pseudo-alternating. Gameplay alternates when a player has successfully completed a mission. Play is then transferred to other player. If player does not complete mission, player continues playing until mission is completed or out of ships.

On the Astro Battles screen, the last two invaders can be slowed down to a crawl if you fire like crazy.

On the Laser Attack screen, if you shoot all the enemy ships except for the laser shooters, you can sit forever on the far left hand side of the screen. There were two ROM versions, and this trick only works on the first version.