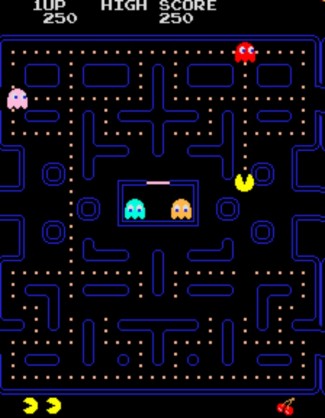 The first maze is an alteration to the original maze. While an extra bump has been added to the once-open bottom row, the top row has been opened up. The areas near the mouths of the escape tunnel are no longer single width tunnels, but more open. This can cause players to miss the tunnels if they are not lined up exactly right. The first maze also contains two extra sets of tunnels, one each above and below the original tunnel. Eating a power pill in the first maze can sometimes make the maze turn invisible. In some versions of Hangly-Man, the maze never reappears until you die.

The second maze is a wide-open maze, with no borders except around the very edges. The same three sets of tunnels exists as well as a new tunnel that has been positioned along the center of the top and bottom of the maze.

During the attract mode, the ghosts are introduced by their original Japanese names and nicknames.

Sets 2 & 3: (All even-numbered levels) Eating a power pill hides the maze until the power pill wears off.