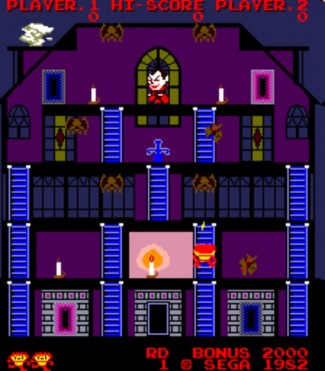 DRACULA’S HOUSE
The player-hero of the game is LITTLE RED, a wily, red-headed boy who chases Dracula throughout his five-story haunted house. Up and down staircases and through Warp Doors leading to secret passageways, Little Red zaps defending bats while attempting to light candles in certain rooms. When a candle is lit a Magic Sword is energized with mystical powers. Little Red must touch the flashing Magic Sword to gain SuperZap power… only a SuperZap will defeat the sly Dracula.

FRANKENSTEIN’S CASTLE
Little Red enters the eerie castle of the hulking Frankenstein. He pursues Frankenstein around his six-story castle while avoiding the fierce Wolfmen. The tricky Wolfmen can be zapped, but be careful, they can duck under the zap and attack Little Red. Fewer candles are now available to be lit. Warp doors to secret passageways can be used only when they flash. Special jump-down zones allow Little Red to jump down several levels at once, eliminating any Wolfmen in the way as he descends, but Frankenstein can only be defeated with a SuperZap.