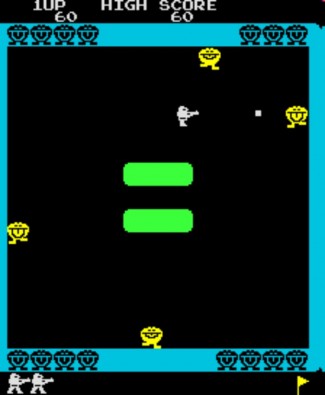 You control a monster fighter. A warp zone is set in the middle of the screen. Warp to the next level when flashing.

You play a monster fighter who can move and shoot in four directions. There are two worlds, the maze world and the space world.

In the maze world you maneuver around blocks while dropping bombs to blow up the monsters chasing you, if you hold the fire/bomb button down for a few seconds the explosion is greater.
The space world is where you start and you run around shooting the same monsters from the maze world. The monsters will change colors randomly and often, if you shoot three of the same color in a row then a special monster will move along one side (top, left, etc.) of the screen, shoot this monster and you get bonus points.

In the middle of the screen in both worlds there are two bars. After a while they will flash WARP in them and upon entering you will be transported to the alternate world. If you fail to enter the WARP and stay in one world too long, a little jingle will play, the music will speed up, and the monsters will become much faster and more determined to get you.